Pictures from Georges Nadon’s collection via his family.

Your  comments  are  just  as precious  as all your  pictures  and documents.

I love this group picture taken in March 1945 at Petit Brogel in Belgium.

Loved it so much I added labels.

I wanted to use it as a reference tool.

That was before I met virtually Josette Nadon on the Internet. Her father was a Spitfire pilot who was only remembered by a picture and a one liner. 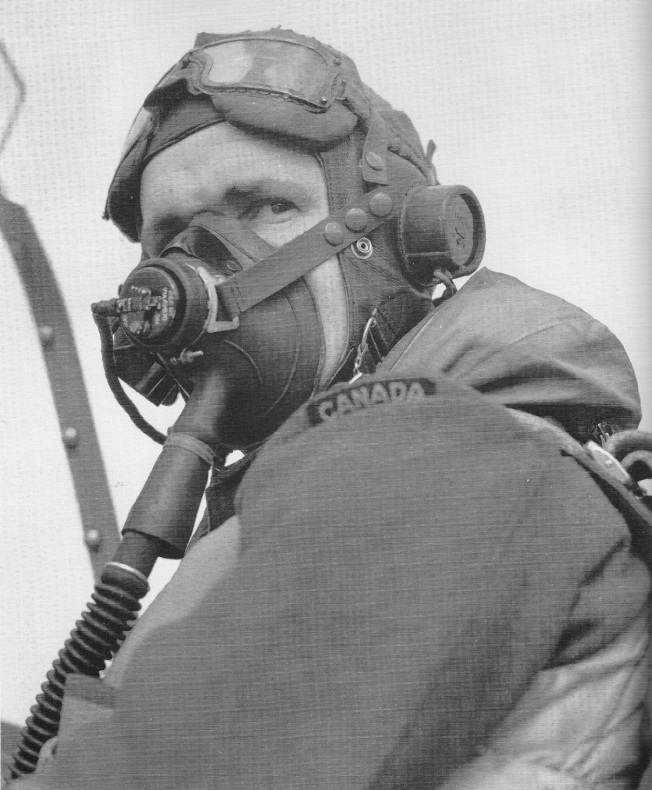 Georges Nadon has now his own blog to be remembered…

This should get some people’s attention… 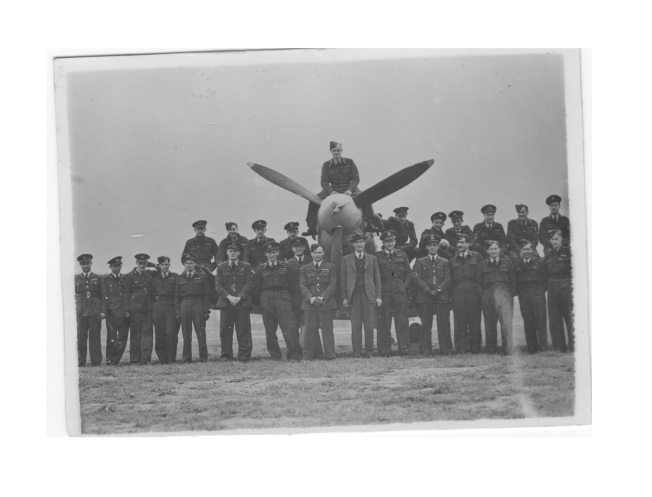 My name is Mehdi Schneyders and I live in Belgium. I am a colored half Belgian – half South African, and a R.A.F. enthusiast as well. There are three Belgian pilots on this picture concerning No. 122 Squadron :

Posted to No. 350 ” Belgian ” Squadron, two of them ( Prévot and Collignon ) are becoming the C.O.’s of the unit. Van de Poel died on collision with another pilot. 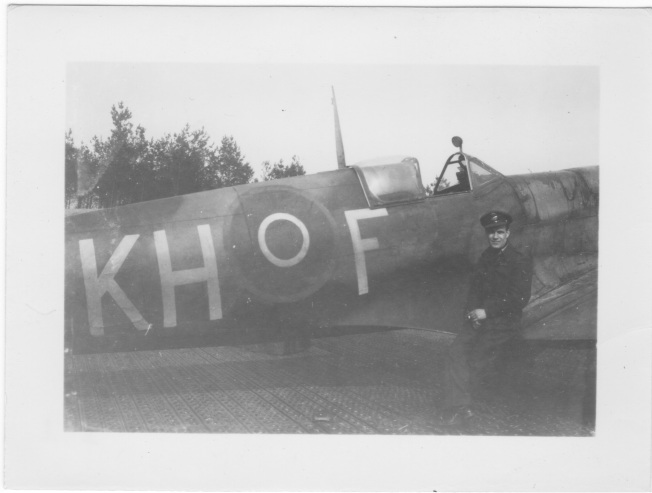 This should get some people’s attention…

More information later about these.

These are three pictures shared by Dean Black. They were taken at North Weald where 403 Squadron was once stationed.

He had this message…

Here are three photographs I took with Steve Butte in April 2002. We visited the North Weald airfield. There is a small museum there, as you can see in the photograph, as well as a prominent memorial to the fallen aircrew who served while operating from North Weald.

Dean on the left is with Steve Butte a Spitfire pilot with 403 Squadron.

Steve Butte is seen here on this picture with his eyes closed. Top row, third from the left.

Georges Nadon is in the first row extreme left. It’s Nadon’s second tour of operations. He would end the war with 277 sorties.

This is Steve Butte again.

This third picture is most interesting.

Most interesting when you compare it with this one.

I know Georges Nadon is in front of a Spitfire and not behind… Just playing with words this morning.

I know what type of Spitfire is pictured here and probably know when this picture was taken.

Who was Georges Nadon, the man behind the plane, and how do we find out how brave a man he was since he talked so little about the war? 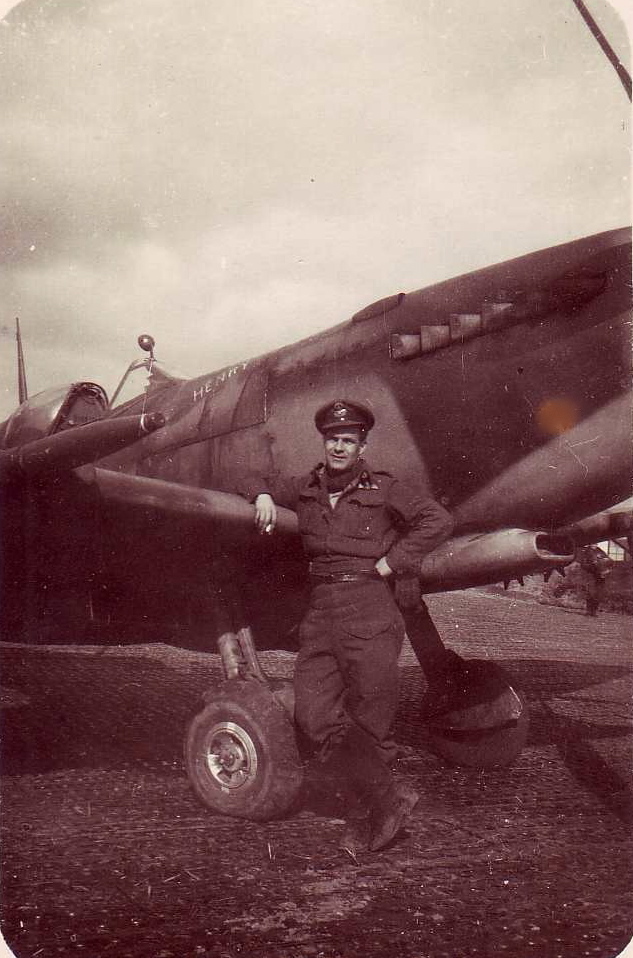 I was wondering why he named that plane Henry.

So I asked his children. One wrote me an e-mail and wrote back with an anecdote from his father.

At one time in Europe, a squadron leader had just landed his plane, and my father was right behind him. However the squadron leader stayed on the runway leaving not enough space for my father to make an easy landing. I was a close call.

The leader started to give an earful to my father, but my father argued back telling him he had learned in his training days that once you have landed you clear the way for other pilots to land, what the leader had not done. According to fellow pilots it seems the leader was a bit of a “show off”.

At that precise moment all the other pilots who were there took my father’s side, and the leader turned away, his face red without saying another word.

Veterans seldom talked about the war. I know because I had the privilege of meeting some veterans since 2010.

Getting back to the plane I think the Spitfire behind George is a Spitfire Mk IX, and this picture would have been taken in France by looking at the pierced-steel plank.

I know Georges Nadon was with 403 Squadron in his last tour of operations because I have his logbook. His first tour was with 122 Squadron in England and then 185 Squadron in Malta, before being rapatriated in Canada, and stationed at Bagotville in 1943. He then got married.

So why is this so important that I should write about this Spitfire named Henry?

Because George Nadon never talked about the 277 sorties he did in WW II and he probably chose to name his Spitfire for his wife Henriette.

Where was this picture taken?

Georges Nadon was posted in several places in his military career in WW II, and I intend to tell you all about it.

Every picture will have its own story to tell.

I don’t know who were the two erks hanging on the wings, but I know Georges Nadon is in the cockpit of the Spitfire Mk Vb with the code MT-M.

I also know where he was stationed when this picture was taken with the information I found in his logbook.

Only two original pilots with 122 Squadron survived the war!

This is what was written on this newspaper clippings.

I know this image of the newspaper clipping is hard to read, but it’s worth straining your eyes a little just like I did to find out a…

Georges Nadon’s son André sent me this picture among others I will show you later.

Georges Nadon has now his own blog, and he won’t be just a name on a group picture taken in March 1945 anymore. 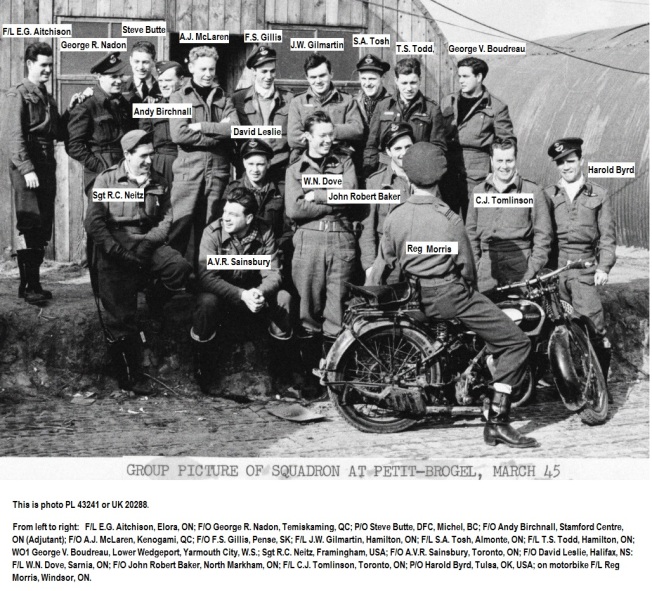 Or a pilot behind a mask…

Dean Black commented on this picture…

In the group photo, back row, far left is Mac Reeves. Third from left, back row, is Steve Butte with his eyes closes. Back row, far right, is a man named Ken Harvey. Ken’s nickname was “Red”. Ken arrived on 403 Squadron on 04 June 1944 and the first thing he said: “I’m really going to like this Squadron-they put my initials on all the airplanes!”

A personal tribute to George Nadon

source of the image

Who’s the pilot behind the mask?

Georges Nadon was more than someone whose hobbies were girlfriends and beer!