Buzz Beurling flew with the 403 as well as Johnnie Johnson.

Few people know that Greg’s grandfather flew some missions with Johnnie Johnson as his wingman.

London, June 28, 1944 – (CP) – Wing-Cmdr. J. E. (Johnny) Johnson, an Englishman from Nottingham, with 32 enemy planes shot down in air combat, shared today with Group Capt. A. G. (Sailor) Malan, of South Africa, the status of top-ranking Allied air ace of this war.
Johnson, who commands a Canadian fighter wing operating from a base in Normandy, downed two German ME109’s yesterday in air duels over the bridgehead front to bring his score up to that of Malan. The latter now is on ground duty.
Top-ranking Canadian airman is Flt.-Lt. George (Buzz) Beurling, of the R.C.A.F., now an instructor in Canada. Beurling has downed 31 planes.
One of the highest-scoring Canadians flying from the R.C.A.F. Normandy base which was established shortly alter D-day, is Sqdn-Ldr. Wally McLeod of Regina, whose total stands at 17. Johnson’s Canadian wing achieved a mark of five enemy planes downed within 48 hours last week. Johnson, a quiet-looking pipe smoking man, is regarded by many airmen who have flown with him, as one of the most brilliant flyers now on operations.

This should tell you a lot about his flying abilities. 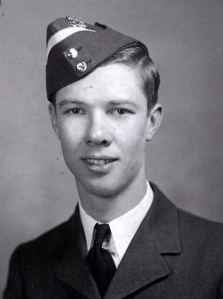 He is the father of Greg’s mother.

Greg is in the process of scanning all the pictures in his grandfather’s album as well as scanning his logbook.

It will take time to do this.

He has a lot to scan.

So this is why I will post an article every day.

We don’t have many readers yet on this blog.

But this is not the reason why Greg and I are teaming up.